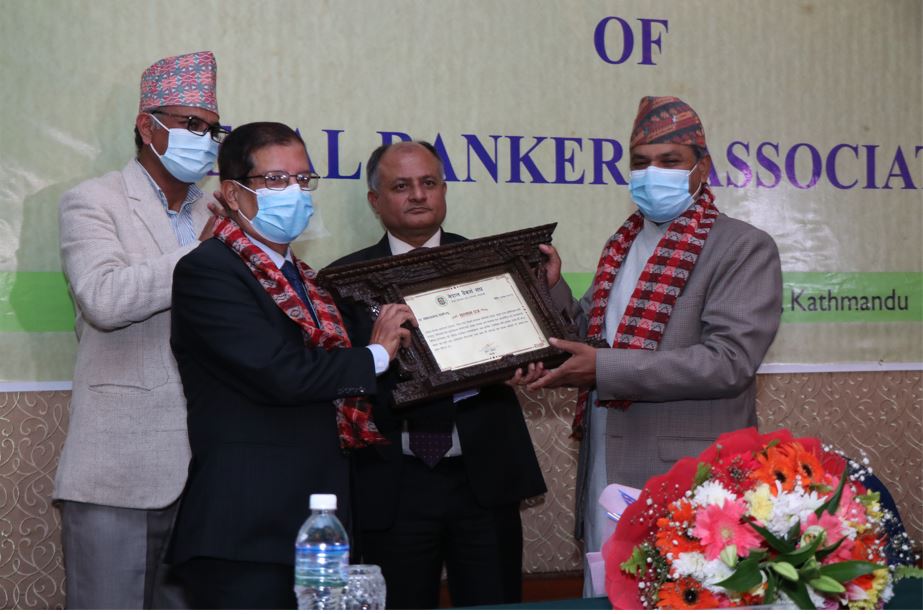 The Immediate Past President Mr. Bhuvan Dahal heartily welcomed all the guests and highlighted some key economic and banking indicators and also touched upon the role played by the banks to support the businesses and economic activities during the period of COVID 19. He also shared the progress made by Nepalese Banking fraternity in Financial Inclusion and Digital Banking. He also thanked Honorable Governor for proposing the amendment in the Banking Offence and Punishment Act through Monetary Policy.

During the program, a music video produced by NBA to support the Let’s Open Bank Account Campaign was also released by the  Honorable Governor. The lyricist of this music video was former Deputy Governor Mr. Chinta Mani Siwakoti.

Giving continuation to NBA’s tradition of felicitating current/past Chairperson during its Annual Function who has significantly contributed towards the development and growth of financial/banking sector, this year the Association decided to felicitate Dr. Shankar Prasad Sharma, Former Chairman of Citizens Bank International Ltd.

Dr. Sharma had served as a Vice-Chairman of National Planning Commission, Member of Board  Director of Nepal Rastra Bank, Ambassador to the United States of America and Chairman of Citizens Bank International Ltd.  He also contributed in the Financial Sector Stability/ Reform through his engagement in different capacity at Ministry of Finance and various international organizations.

During the function, the Chief guest of the Program Honorable Governor Mr. Maha Prasad Adhikari, NBA President Mr. Anil Kumar Upadhyay and Immediate Past President Mr. Bhuvan Dahal jointly presented Dr. Sharma with a momento in recognition of his significant contribution in the banking and financial sector of Nepal.

Speaking after the felicitation, Dr. Sharma shared his experiences of financial sector reforms. He further stated that reform is a never ending process and banking sector is very sensitive sector of an economy that may have immediate effect in the overall performance of the economy.

Chief Guest Honorable Governor addressed the event and shared the progress made by banks in the financial inclusion and digital banking. He stated that banks should be cautious in lending activities and support towards economic growth. He also requested banks to perform considering the long term goals rather than short term goals.

The newly elected President Mr. Anil Kumar Upadhaya thanked all guests for their presence at the function. He shared his vision to improve banking sector and take it to the new heights. He emphasized the role of banking sector in the economic growth and development in the days ahead as well.  He requested all the members and stakeholders for their continious cooperation and coordination.