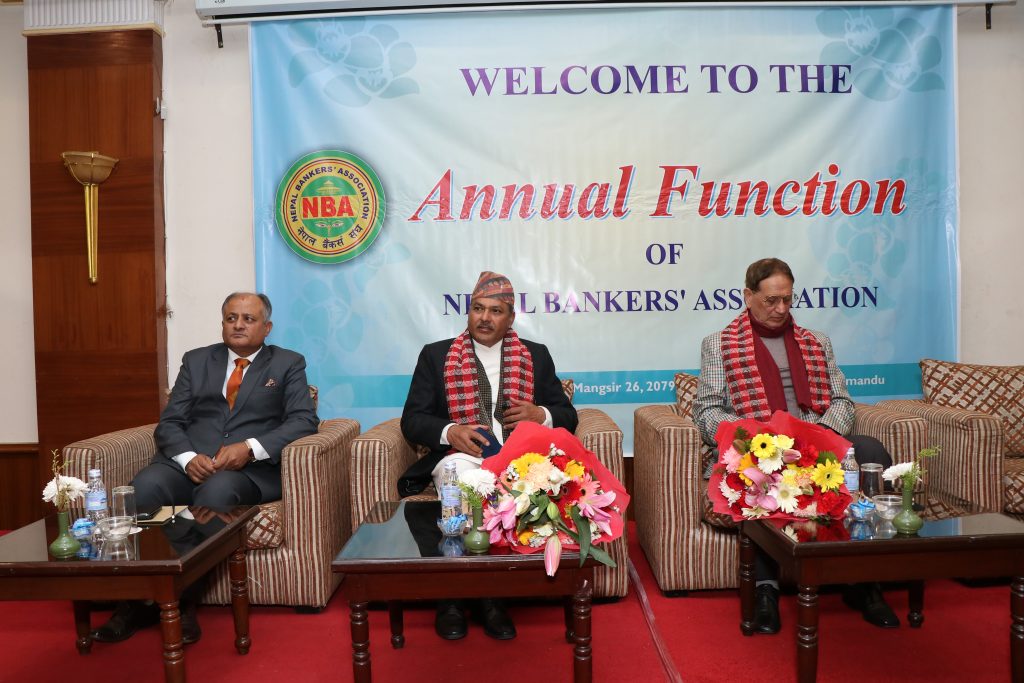 On the occasion of AGM, NBA also held Annual Function. During the function, Dr. Tilak Rawal was presented with a Certificate of Honour in recognition of his significant and unceasing contribution to the banking industry and the economy. Dr. Rawal has held a number of high-profile positions in various national and international organizations including Governor of Nepal Rastra Bank, Constituent Assembly Member, President of NBA, Executive Chairman of Rastriya Banijya Bank Limited, General Manager of Agricultural Development Bank Limited, among others.

NBA President Mr. Anil Kumar Upadhyay, delivered welcome remarks where he highlighted that establishing a common ground between the Government, Nepal Rastra Bank and the Private Sector is a major challenge at present. Furthermore, he shared about the current market position, resource collection efforts, economic downturn and the strain in liquidity brought on by widening trade imbalance all of which has an impact in the banking sector. He further stated that banks are facing additional challenges including continuous decline in ROE.

After receiving Certificate of Honour, Dr. Rawal, thanked NBA for it and during his address shared about the economic problems observed globally and how Nepal’s economy is relatively stronger than a lot of other South Asian nations. He added that everyone should collaborate to tackle the current issues to further strengthen the economy.

Chief Guest of the Program Honorable Governor Mr. Maha Prasad Adhikari said that the country’s economy is improving and availability of liquidity in banks is gradually increasing. Additionally, he stated that Nepal Rastra Bank is cautious in controlling inflation and will not leave any efforts behind to achieve economic stability. He further emphasized that we all should put more focus on domestic production and lessen our dependence on remittances.

At the end of the program, Mr. Sunil KC, Vice-President of NBA, said that the NBA is ready to liaise with concerned stakeholders to overcome the current challenges in the economy and stressed that we all should work together. He also expressed gratitude to everyone for their participation.

The Program was attended by the Governor and senior officials from Nepal Rastra Bank, officials from the Ministry of Finance, Representatives from various Associations and Organizations, Board Members and senior management from banks, media and various other industry stakeholders.