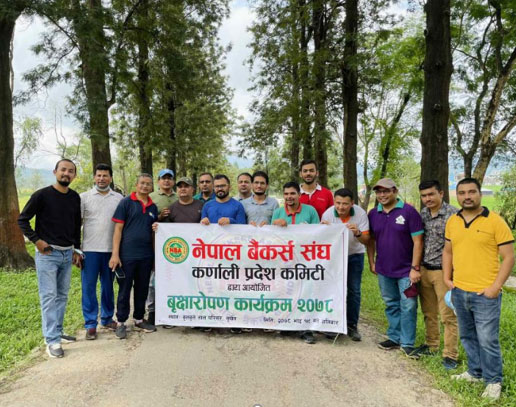 Nepal Bankers’ Association (NBA) Karnali Province Committee organized a ‘Tree Plantation Program” on Saturday, September 4, 2021, at Lake Bulbule premise, Birendranagar Surkhet. This program was conducted with the intention of promoting greenery, a clean environment as well as the aesthetically pleasing landscape in the town of Birendranagar thereby substantiating internal tourism in Surkhet and Karnali Province as a whole. The Tree Plantation Program was attended by Mayor of Birendranagar Municipality Mr. Dev Kumar Subedi and Chief District Officer of Surkhet Mr. Chhabi Lal Rijal as special guests.

Both dignitaries expressed appreciation and congratulated the banking sector for this good initiative and assured support from their respective field in such social programs in days ahead.

The Committee Coordinator Mr. Ram Kumar Thapa expressed his gratitude to the Mayor and the Chairman of Surkhet Valley Town Development Committee Chairperson Mr. Subedi and the Chief District Officer Mr. Rijal for their motivation and support for this initiative. He also thanked all concerned for their support and time to make the event a success. Other participants were Nepal Rastra Bank and Nepal Police along with Province Heads or their representatives of various Commercial Banks in Birendranagar, Surkhet.

Altogether 55 plants of various trees including Kalki, Jacaranda, Gulmohar, and Sami were planted on the occasion